“Intensity. Skill. Tenacity. The bodyguards of Elite Guardians Agency have it all.”

With this tagline, you can’t help but be intrigued; especially when you realize that all of the bodyguards in the agency are women! “Always Watching” is the first book in Lynette Eason’s new series from Revell, aptly entitled “Elite Guardians”. Written from several perspectives, this romantic suspense novel is impossible to put down. It is also fast-paced enough to leave you breathless, and so vividly creepy that you just may want to sleep with the lights on for, say, a WEEK! (Hypothetically speaking, of course, because I definitely didn’t feel that way myself… Well, maybe just a little!) 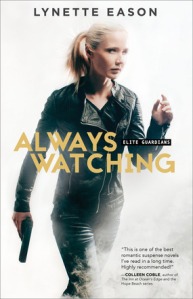 The unique premise of this novel stems from the fact that it is primarily about a woman named Olivia Edwards, who protects a man named Wade Savage, from a persistent and increasingly dangerous stalker. Basically, this twist flips the majority of romantic suspense plots upside down. In addition, the storyline is fascinating and mostly believable, and is revealed through the eyes of not only the two protagonists (Olivia and Wade), but also the stalker as well as Wade’s young daughter. In a race against disaster – and death – multiple secondary characters step forward in a shocking revelation of their part in a distorted and sinister plot.

Overall, this was a compelling and surprising novel. Written in an unusual style and with unique characters playing unorthodox roles, readers won’t be able to help being drawn into the suspense. If you enjoy clean but scary, gripping but unusual suspense novels, don’t miss the first book in the “Elite Guardians” series, and be sure to watch for the continuation of the series later this year!

I am grateful to have received a copy of this book from Revell Reads, free of charge, in exchange for an honest review. All opinions expressed are my own.