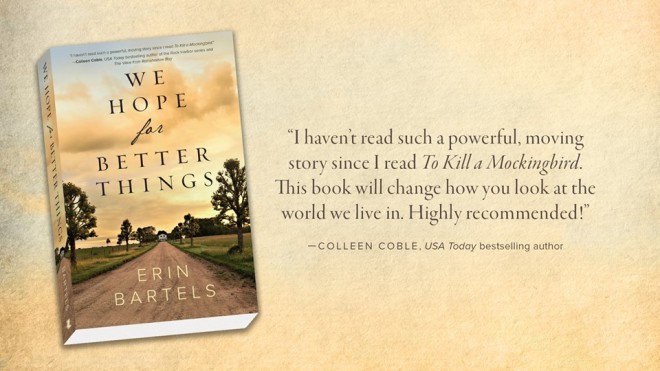 Have you ever read a book that was challenging, emotional, and perhaps even uncomfortable – but at the same time you couldn’t put it down because it was so richly written, engrossing and empathetic? This was my experience with “We Hope for Better Things”, an incredible debut novel written by Erin Bartels and published by Revell. This story weaves the past and present into an unforgettable journey told through the eyes of three women united in the same family, but separated by years of time.

Set in Detroit, Michigan, in three separate time periods (present day, the 1960s, and the 1860s) “We Hope for Better Things” is at times sweetly romantic, at other times gut-wrenchingly painful, and occasionally rather haunting. You see, the overarching theme of all three portions of the story is racism; the ugly, gnawing prejudice and antagonism of one group of people to another. . . from the Underground Railroad of the Civil War, to the turbulent years of Detroit’s unrest between black and white, to the present day issues with discrimination, this story brings to light the struggles of hatred and the testaments of love that are so similar throughout history, regardless of time or place.

As I said before, this book was challenging emotionally. There were portions that were definitely mature in subject matter (for example extra-marital affairs and the murderous effects of racism) but they were handled with what I felt was appropriate discretion. Clearly each facet of this story was carefully thought out, layered and woven into the other two stories with masterful skill. Also, because the chapters alternated between time and characters, it created a sense of suspense because you had to wait three chapters to find out what happened next in that particular story – this made for an un-put-downable narrative!

Altogether I think “We Hope for Better Things” is destined to become a classic, simply because it is not afraid of discussing the hard things of life, and in doing so it makes us look deep inside ourselves and question our own motives, our own prejudices, our own hopes. It is an incredibly powerful story, not necessarily one that I would recommend to everyone, but one that will prove unforgettable for mature readers… And without question, I am highly anticipating future books by the talented Erin Bartels.

I received this book courtesy of Revell Publishing, in participation with a Revell Reads Blog Tour.  All opinions expressed in this review are my own.