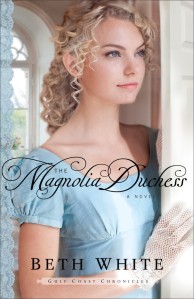 Sometimes you just don’t connect with a book in any way, shape, or form. Unfortunately, this was the case for me with Beth White’s third book in the historical “Gulf Coast Chronicles” series published by Revell, and entitled “The Magnolia Duchess”. Perhaps it was the confusing combat scenes… Maybe it was because the characters were, to put it bluntly, unlikable and annoying… Possibly the entire story being absurd and unbelievable played a big part… But in any case, I DID NOT enjoy this story!

Admittedly, I probably should not have read this book without reading the previous books in the series. Because more than 70 years pass between the first and second books, and nearly 40 years lay between the second and third books, I simply assumed they were separate stories and could easily stand alone. It appears I was wrong! The family relationships, not to mention the unusual French, Spanish, and Native names, are extremely confusing and I never completely sorted them out. Equally confusing are the battle descriptions that infuse every prolonged chapter, and the historical facts which only reveal portions of the big picture, (leaving the rest for you to research on your own, I suppose). In addition, the inappropriate scenes and dialogue in this book are too detailed, too common, and too easily ignored to be acceptable. Overall, as much as I hoped to enjoy this novel, I am sorry to say that it was a waste of my time, and I will not be re-reading or recommending it in the future.

I am grateful to have received a copy of this book from Revell Reads, free of charge, in exchange for an honest review. All opinions expressed are my own.