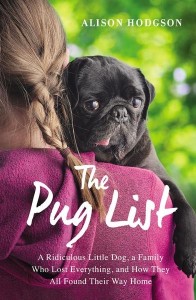 Three adjectives to describe this book would be promising, confusing, and misleading. “The Pug List: A Ridiculous Little Dog, a Family Who Lost Everything, and How They All Found Their Way Home” is a non-fiction book written by Alison Hodgson and published by Zondervan in the spring of 2016. When I first learned about this book, I was sure it would be a sweet story filled with anecdotes about a pug named Oliver and his new family who is struggling to recover from a terrible house fire. In reality, though, this isn’t what the book delivered…

The story begins before the house fire occurs, and walks the reader, at a maddeningly slow pace, through the entire process not only of the fire itself but also the relocation, the insurance issues, the rebuilding process, the charity of friends and family, the emotions, and the general chaos of each and every bit of aftermath. This detailed saga lasts for approximately two-thirds of the book, jumping back and forth between past and present in a confusing sequence. Finally, on page 129 (of 208) there is a chapter entitled “The Pug List”, and the main point of the story begins… The youngest daughter wants a pug. The remainder of the book tells of their struggles to adopt a pug, and finally the story of how Oliver the pug became a member of the family. Although this portion is supposed to be an inspirational picture of healing, it actually just annoyed me. The pug didn’t really seem as hilarious or extraordinary as the book’s back cover said he was. In fact, the family treated him as a spoiled child… Who allows one or two dogs to sleep on their daughter’s bed every night, after she admits that she never sleeps well with them there? This is just one example of many.

Overall, I was disappointed with this book and do not intend to recommend it to others, or read it again myself. Apart from the misleading storyline mentioned before, several other key points combine to make this a book to be approached with caution… God’s name was at least partially misused several times, and several swear words were uttered or alluded to. Additionally, the author and narrator of the story was extremely unlikable at some points, and barely tolerable at others. In conclusion, I honestly can’t think of a single feature that is strong enough to redeem this unlikeable book. Even pug-lovers are likely to be annoyed at the misleading nature of a story that promised inspiration.

I received this book free from the publisher through the BookLook Bloggers program. I was not required to write a positive review. The opinions I have expressed are my own.

One thought on “Misleading and Annoying”