Happy Thanksgiving, fellow Canadians! Most of us celebrate this long weekend and dedicate it to giving thanks for the many blessings we receive each day, but did you know there is another special day to celebrate this week?

Thursday, October 11th is the International Day of the Girl. As Mikayla from Graf-Martin Communications explains, this is “a day established by United Nations General Assembly, dedicated to highlighting the unique needs and challenges girls face, specifically in developing countries.”

As part of the celebration for International Day of the Girl, Compassion Canada is sharing about a special project that is both inspiring and humbling at the same time. Please read the story below, and let the important work being done with this project touch your heart, and remind us to share God’s love and compassion to help girls (and boys!) grow into all their Heavenly Father intends for them.

Men working at sewing machines may seem like an unconventional picture—even more so when you realize they are sewing reusable feminine hygiene products! But for several men in Mulatsi, Uganda, this is a regular practice that is strengthening their community, generating income and empowering their daughters.

Period poverty refers to the lack of access to hygiene products for girls living in poverty—something that was an immense struggle for women and girls in Mulatsi.

Sanitary pads cost approximately $1 for a package of seven, a burdensome price for families living in extreme poverty. As a result, women were forced to improvise. “One woman told me she uses newspapers; another, rugs; another, cloth from old blankets; and still another said they cut off part of an old mattress,” says Jacky, the director of the Compassion child development centre at Mulatsi Church of Uganda.

Period poverty was the biggest problem raised by women during a community meeting organized by the church.

The men in the community were largely ignorant to the need and did not see it as their responsibility to provide pads for their wives or daughters. Milton, one of the fathers in the community, confesses that he didn’t expect to have such conversations with his daughter. “I thought it was not proper for a girl to talk to me about sanitary pads,” says Milton. He would tell his daughters to have such conversations with their mother. Like most of the men in the community, Milton did not give his wife money to buy pads—the family could not afford it.

Jacky learned that period poverty was causing other significant problems like teenage pregnancy and school dropouts.

“Three of my daughters got pregnant,” says Aida, the mother of a Compassion beneficiary. Aida had discovered, to her dismay, that her daughters were trading sex for pads. This practice was not uncommon for girls in the community.

“My fourth daughter grew up knowing God and would open up to me,” she says. “When she began her periods, she told me, and I got her an old cotton cloth and folded it for her. I had several she would wash and keep.” 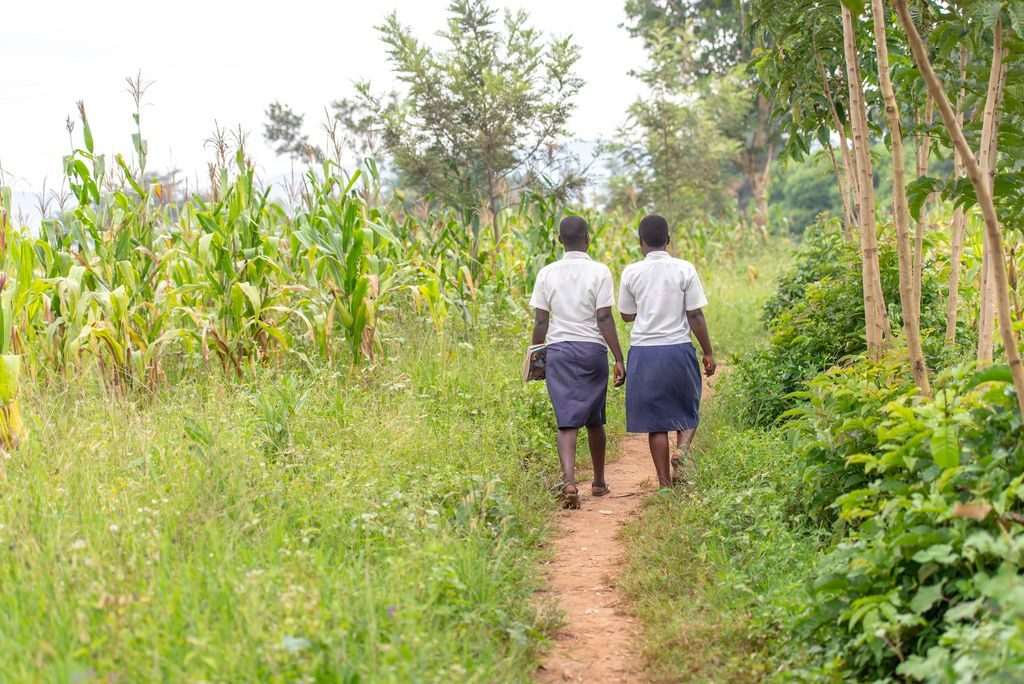 Some of the girls opted out of school because of how difficult it was to manage their cycle every month. The World Bank estimates that across Sub-Saharan Africa, one in ten girls misses school during their menstrual cycle, and many drop out of school altogether. One student, Carol, will never forget the day her cloth pad fell out in front of her classmates while at school. She almost stopped attending school due to the embarrassment.

“The other students laughed. I was so ashamed. I ran home and got another pad. I didn’t go to school for two days. I was scared. My fellow students didn’t respect me,” says Carol.

When the staff at Mulatsi Church of Uganda learned of all the struggles women and girls were going through, they were moved to intervene. Initially, they bought and distributed pads to Compassion beneficiaries. However, this was not sustainable and proved expensive.

Then a group of Compassion church partners, of which Mulatsi Church of Uganda is part, applied for funding for menstrual hygiene interventions through Compassion’s Complementary Inventions. With the funds they received, the churches were able to education their communities on the importance of menstrual hygiene—and teach their communities how to make reusable sanitary pads. One set of seven reusable pads costs $1.50 to make and will last an entire year. 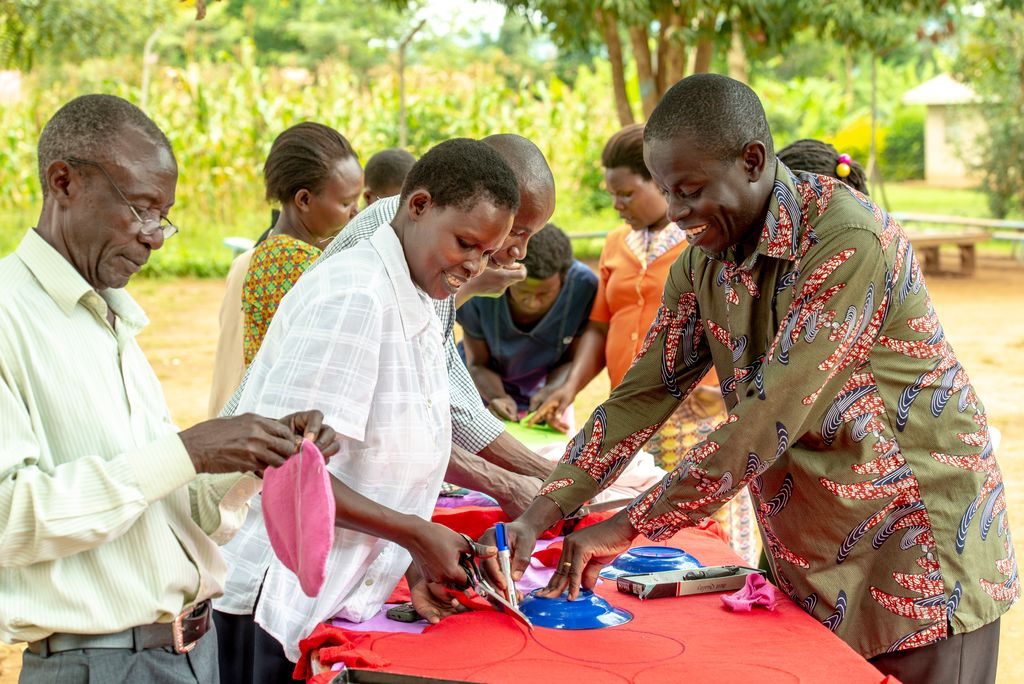 The centre staff first learned how to make the reusable pads, and then conducted training for community members—both women and men. They not only trained Compassion beneficiaries and their parents, but also students at three local schools, and other local leaders, who were then able to teach others in the community. All churches in the group received training, and everyone who received training was asked to train others in turn.

The project also specifically addressed men’s attitude towards menstruation and feminine hygiene. While the project was led by women, men followed closely as unexpected—but welcomed—allies. Milton says, “After the training, I realized that as a father I should learn how to make these sanitary pads.” The making of reusable pads has also become a source of income generation for families. “It has also helped me because now I am able to make them and sell them and get money to do other things,” says Milton. 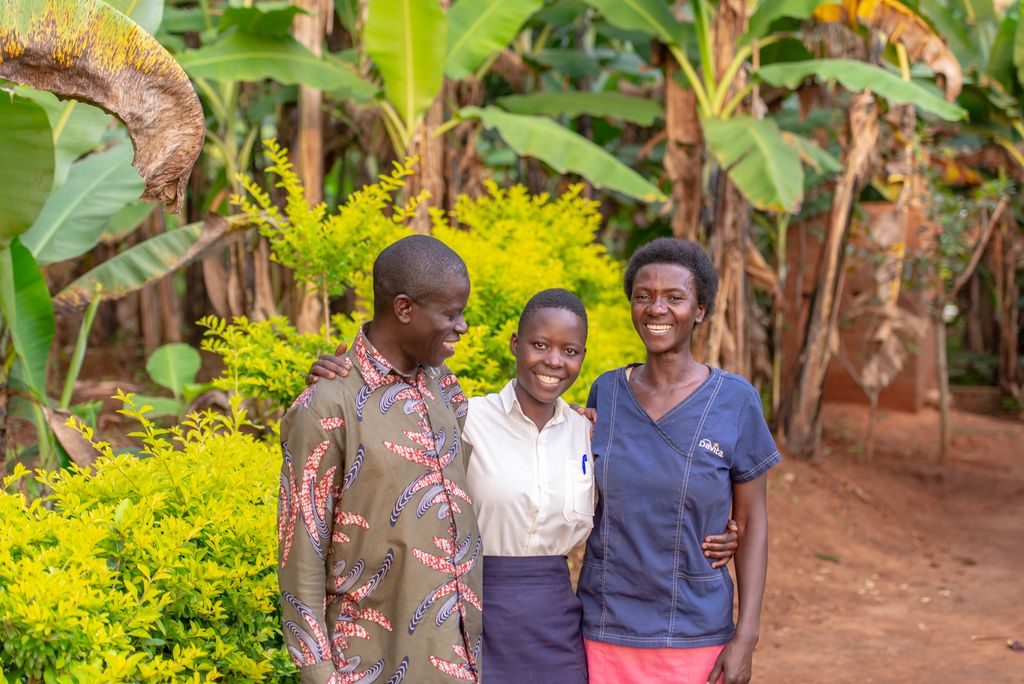 At first, other men demeaned Milton when they saw him making and selling sanitary pads. “In the beginning, it was shameful before the men in the community. But I found it useful. I have now educated other men. I think [their attitude] stemmed from their background.,” says Milton.

Carol also reflects on the benefits of the intervention. “My mom now sells sanitary pads and was able to buy us sandals—before, we were walking barefoot,” she shares. “We know God is working for us. The church has brought us knowledge and we are benefiting a lot.”

3 thoughts on “Compassion Canada Celebrates “International Day of the Girl””