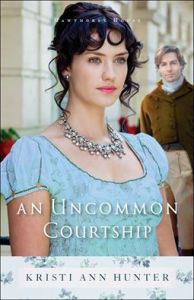 When the first two books in a series are enjoyable, humorous, inspirational, and contain clean Christian content, isn’t it a logical conclusion to assume the third book will continue in a similar direction? I thought so… But I was proven wrong – quite wrong. “An Uncommon Courtship” is the third book in the “Hawthorne House” series written by Kristi Ann Hunter and published by Bethany House. Because each of these books are closely connected with each other, and the characters are recurring, it is easy to imagine the excitement of a new release. Equally easy to imagine is the disappointment when expectations remain unmet.

“An Uncommon Courtship” starts out harmlessly enough, with only occasional, mild remarks marring an otherwise clean and cute “marriage of convenience” story for the youngest Hawthorne brother, Trent. About two-thirds of the way through the book, however, a scene occurs that throws “clean” out the window, and most of the remaining chapters of the book are spent discussing, thinking about, and analyzing this scene. I am not going to describe or explain it, but suffice it to say that it is completely inappropriate for Christian Fiction, and especially unacceptable for younger readers.

For a series that started out so hopefully, “An Uncommon Courtship” is a huge disappointment. If only Christian fiction could remain within the bounds pressed upon us by Bible verses such as Philippians 4:8… While I have not decided if I will read the next Hawthorne book, I will never be able to recommend this series with the glowing review that the first two novels deserve. And that is frustrating and disappointing, to say the least.