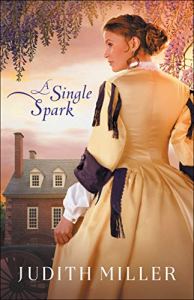 I always learn some interesting history lessons when I pick up a Judith Miller book from Bethany House Publishers! In her new release of “A Single Spark”, I discovered unique facts about the arsenals responsible for producing munitions during the Civil War, and how the vast majority of employees in these facilities were women. Although necessary for the Union Army to win the war, these were dangerous positions for many reasons including close contact with gunpowder, as well as the possibility for treasonous activity within the production sites. . . As was the case in “A Single Spark”!

Although the history was interesting, the storyline and the characters who brought it to life were a little lacking – they downright drove me crazy at times with their naivete! I could see who the ‘bad guys’ were from a mile away, but the heroine remained in the dark until just about the end of the book. I guess her biggest character trait was undying loyalty, but it still seemed that she was a little silly for not catching on to obvious hints a bit sooner.

In any case, I enjoy reading Judith Miller’s stories for their unique insight into rarely depicted snippets from history, but the characters and plot of this particular story fell a bit flat for me. But if you can overlook this flaw and see beyond to an otherwise decent Christian Historical Novel, you may want to give “A Single Spark” a try.