It feels like a long time since I’ve read anything by beloved author Janette Oke and her daughter Laurel Oke Logan, so I was delighted to hear that they are once again releasing a new series of books from Bethany House! This time it is the “When Hope Calls” series based on the Hallmark TV show of the same name – and it is distantly connected to the “Return to the Canadian West” / “When Calls the Heart” series as well. But anyway, aside from all the connections this new story makes, “Unyielding Hope” is a lovely story in its own right! 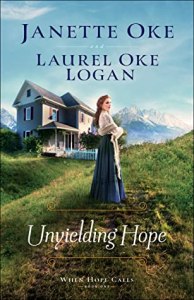 The first thing that caught my attention with this story is… it’s set right in my own hometown area of southern Alberta, Canada! This is so special to me, as not many stories take place in this region. But more importantly, the characters, themes, and storyline are compelling enough to capture my imagination and sweep me back in time. I empathized with Lillian’s choices, admired the courage of young Lemuel, was inspired by Grace’s faith, and hoped that Walter could win his lady’s affection. Of course, the one downside to getting so attached to the story and characters is that when I reached the end and realized there is still more to come, but not until the next book is released, I was a little bummed out! But that simply indicates a good story, right?

If you are one of Janette Oke’s loyal fans (as anyone who reads Christian Fiction likely is) I definitely recommend this new release with her daughter. Even though it is based off a television series, it is a beautiful story all on it’s own, too. I actually have not watched the show, but thoroughly enjoyed the book just the same. So regardless of how you are familiar with Janette’s writing, this new story will inspire and encourage you, just as her writing has always done for so many readers over so many years.