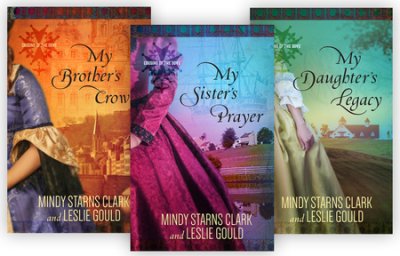 I have been waiting a long time to finally discover the conclusion to a strange mystery that stretched over three books. . . With the release of the third “Cousins of the Dove” story, I finally received this closure! “My Daughter’s Legacy” was written by Mindy Starns Clark and Leslie Gould, and published by Harvest House in the summer of 2017. 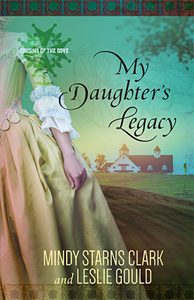 Certainly the most memorable element of this story is the unique, carefully-plotted and intertwining story that takes place over two time periods: present day and 1864 (towards the end of the Civil War). The authors did a remarkable job in mirroring the two stories back to each other, weaving the events and character growth into one amazing story of faith through the generations. It was also great fun to become reacquainted with the present-day characters who have filled the pages of the previous two books (“My Brother’s Crown” and “My Sister’s Prayer”) with their stories of love and faith.

There are a couple things that annoyed me about this finale to a good series, however. First, and strangely

enough, I’m not sure if this is the final book in the series or not! You see, I thought there would be one more story because, after all, there are four cousins and only three of them have told their stories so far! However this doesn’t seem to be the case. The mystery tying all three books together was solved, the fourth cousin (with her story yet untold) seems to be in a relationship, and overall things seem to have wrapped up. Second, while the conclusion to this intriguing mystery was satisfying, it was wrapped up in a big rush and still left a few questions unanswered. I wonder if a fourth book was initially planned but eventually cancelled. . . ?

In any case, the “Cousins of the Dove” series was a pleasure to read from start to finish. In each novel, the masterful interweaving of two time periods makes for a wonderfully unique tale filled with hope and faith through the generations. If you have enjoyed this series from the beginning (and these books really should be read in order) you will absolutely NOT want to miss “My Daughter’s Legacy”.

This book was provided courtesy of Harvest House Publishers, in exchange for my honest review.